Trey Alexander still being in the game late in regulation and overtime was improbable enough for Creighton.

Never mind the freshman making the tying and winning plays while playing with four fouls since early in the second half.

Alexander converted a go-ahead, three-point play late in overtime, and the Bluejays rallied for a 72-69 victory over San Diego State in an NCAA Tournament opener Thursday night.

Creighton hadn't led since the first five minutes of the game when Alexander, who also had the tying bucket late in regulation, drove right and was fouled on the layup. The free throw put Creighton ahead 71-69 with 1:08 remaining.

Alexander's role has increased since Ryan Nembhard, the Big East freshman of the year, injured his wrist Feb. 23 and required season-ending surgery. Alexander took over as the starting point guard. 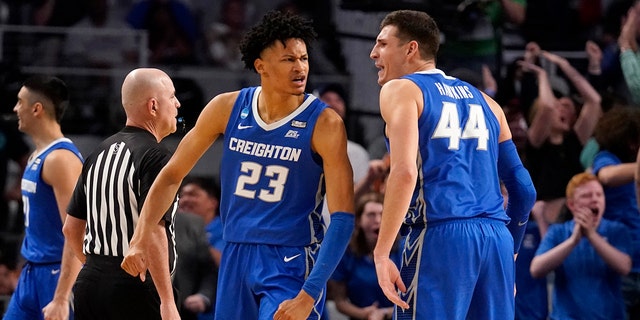 Creighton guard Trey Alexander (23) and forward Ryan Hawkins (44) celebrate a basket scored by Alexander in the second half of a first-round game against San Diego State in the NCAA college basketball tournament in Fort Worth, Texas, Thursday,  (AP Photo/Tony Gutierrez)

"He’s been put into a very difficult role at midseason and what we’re asking him to do and what teams are trying to do to take him out of play," coach Greg McDermott said. "And he’s handled it not like a freshman. He’s handled it like a veteran."

Down by two, the Aztecs had the ball with 4.3 seconds left when Matt Bradley inbounded to Aguek Arop, then ran around him for the handoff. Bradley lost control of the ball before getting a shot off, and Creighton secured it with 0.8 to go.

Ryan Kalkbrenner had 16 points and 10 rebounds before leaving with an apparent left leg injury in overtime. Alexander scored 18 points with five assists and had the ball in his hands plenty in crunch time as the Bluejays scored the last nine points of regulation and the last six of OT.

"I think it has a lot to do with first off (McDermott) trusting in me and then also my teammates," Alexander said. "What you do every day after practice, before practice, whatever you want to say, the extra work that you put in, I feel like it just takes over in the late moments and it’s not really you thinking about it. It just happens."

The ninth-seeded Bluejays (23-11) will play Saturday against the winner between Kansas, the top seed in the Midwest Region, and Texas Southern. Creighton reached the Sweet 16 last year.

Chad Baker-Mazara scored 15 of his 17 points in the first half for the Aztecs (23-9), who were in position for their first tournament win since 2015. Bradley added 15.

Bradley had a chance to give San Diego State the lead on free throws with 6.4 seconds left in regulation when Alex O'Connell fouled him on a drive. Bradley missed the front end of a one-and-one, and Arthur Kaluma dribbled the length of the court before lofting an air ball from the baseline as time expired.

"It's the agony and ecstasy of March," San Diego State coach Brian Dutcher said. "I thought we competed at a high level, put ourselves in position to win. To Creighton's credit, they closed the game and beat us."

The Aztecs, whose last three losses before the tournament were by a point each, had led by at least five points since the middle of the first half when O’Connell, who scored 15 points, hit just the second 3-pointer of the game for Creighton to get the Bluejays within four just inside the two-minute mark.

After a steal led to a layup from Kalkbrenner, Creighton forced another turnover before getting two shots blocked at the other end. The Bluejays thought they had the tying basket on another steal after the second block, but an official ruled San Diego State called timeout.

That ruling was reversed on replay, giving Creighton possession. Alexander hit the tying layup with 11 seconds to go.

Creighton: The Bluejays missed their first 10 3-point tries before Arthur Kaluma hit one to get them within five with 4:33 remaining. Creighton finished 2 of 14 from deep after coming in ranked 313th out of 350 teams beyond the arc. Both of the makes were big, though.

San Diego State: Nathan Mensah, the defensive player of the year in the Mountain West Conference, wasn't much of a factor because of foul trouble. He picked up his fourth early in the second half, then his fifth just 34 seconds after re-entering the game.

Kalkbrenner went down and grimaced after a posting up Arop as they made contact with each other early in overtime. The 7-foot-1 sophomore got up, tried to take a couple of steps and went back down, holding his left knee. After several minutes, Kalkbrenner was helped off the floor without putting weight on his left leg.

"We had a devastating loss with Kalkbrenner going down, so this is a little bittersweet because of what he’s meant this team this year, he’s meant to the run we went on in February to get us here," McDermott said. "He’s been a key component of that, and it’s unlikely that we’re going to have him on Saturday."

San Diego State's loss finished off the Mountain West at 0-4 in the tournament. Wyoming lost to Indiana in a First Four game. The other first-round losers were sixth-seeded Colorado State to Michigan and No. 8 seed Boise State, the conference tournament champion, against Memphis. 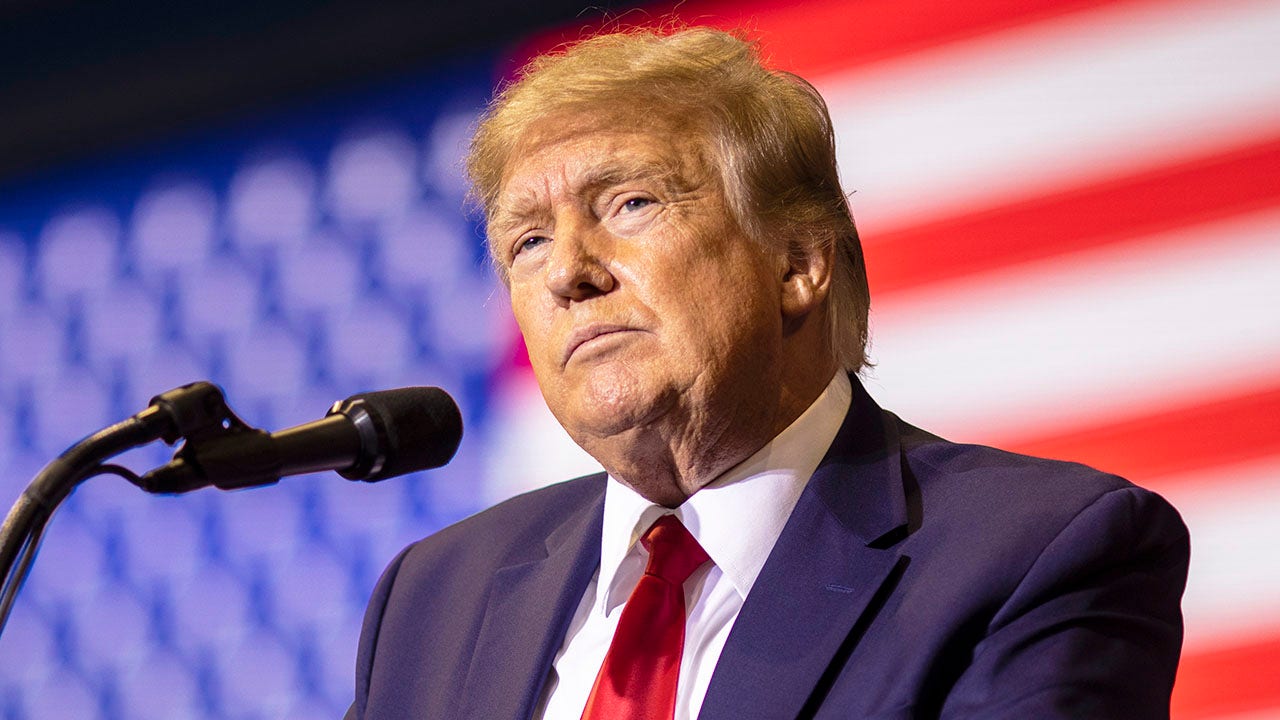 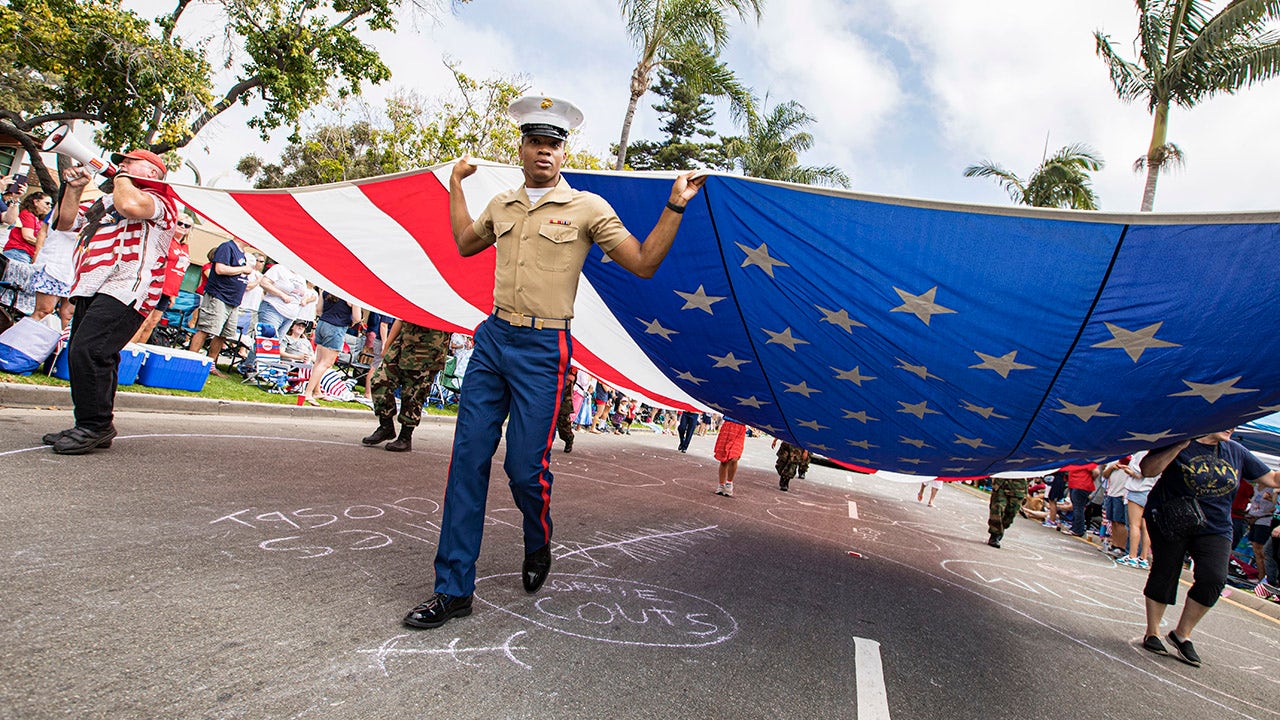