Who will be Lord Sugar's new business partner?

The all-female final of The Apprentice next week will see a pyjama brand founder and a dessert brand owner go head to head to become Lord Sugar's next business partner.

Last night, for the first time ever, four women presented their business plans to be scrutinised by Lord Sugar's most trusted advisors in the penultimate episode of The Apprentice.

Having fought off the competition and answered criticism from Lord Sugar's team, Kathryn Burn and Harpreet Kaur made it through to to next week's final where one will walk away with a £250,000 investment and will go into business with Lord Sugar as a 50-50 partner.

Insta star Kathryn left school at 16 and credits her 'working class' upbringing with instilling her with the values of hard work and entrepreneurship.

She started her pyjama company in her parents' spare bedroom and now hopes to take her business to the next level.

However she was criticised by Lord Sugar's advisors for manufacturing her products in China, and her overly-ambitious business plan.

Described by Karren Brady as 'bossy', Harpreet had her start working in her parents' convenience shop before juggling an Open University degree with a full-time job in a bank.

Believing she could be her own boss, Harpreet and her sister Gurvinder founded a dessert parlour which Harpreet believes could be scaled up with Lord Sugar's help.

But Lord Sugar had questioned about the relationship between Harpreet and Gurvinder, asking who he was really investing in.

So who will win next week's final? Read on to learn more about the candidates and decide for yourself...

Having fought off the competition and answered criticism from Lord Sugar's team, Kathryn Burn and Harpreet Kaur made it through to to next week's final of The Apprentice

Insta star Kathryn left school at 16 and hopes to use Lord Sugar's £250,000 to help her grow her online pajama business

Glamorous: Decisive, daring and confident, Kathryn Burn credits her parents' work ethic with driving her success as a 'sassy' and 'loud' business owner. She also boasts 41,000 followers on Instagram, where she shares bikini-clad pics from her jet-set adventures

Decisive, daring and confident, Kathryn Burn, 29, credits her parents' work ethic with driving her success as a 'sassy' and 'loud' business owner.

'We've come from a very working class background but we've always had such happy memories,' she said in special BBC programme The Apprentice: The Final Four.

'They've always wanted to provide for me, my brother and my sister so I think I've seen a great work ethic from a young age. I've carried that through because it's all I know.'

Proud father John worked for the local electricity board for 'a long time' before being made redundant. 'Then I did anything that was available, knocking on doors, selling whatever I could,' he said. 'I tried anything. We did it out of necessity.'

Shining star: Kathryn has impressed throughout The Apprentice and is now in the final four. Pictured, selling products during the shopping channel task

He remembers his middle daughter as 'the boss' while her mother Sarah said she was a 'wheeler dealer', even as a child, who used to buy and sell items in online auctions.

Kathryn left school at 16 and spent time living in Australia, where she worked for an events company.

It was there she realised she wanted to be her own boss - and came up with the idea for her business.

Family-oriented Kathryn founded My Christmas Pyjamas, which provides matching pyjamas for the whole family, including dogs, from her parents' spare bedroom.

Proud: Kathryn credits her parents (pictured) for showing her the value of hard work

She later branched out to My Everyday Pyjamas, catering for the rest of the year.

During last night's episode, she said: 'Having this investment would let me grow my business to a much larger scale. It would change my life.'

However the businesswoman was grilled on how she designs the pyjamas, as well as her decision to manufacture the products in China.

Linda questioned her: 'All your goods are coming from China. This is a time when there are significant delays in China - what happens is something goes wrong? What happens to your business?

'Have you got any experience of working with this factory? Learning as you go does not cut it with me.'

Kathryn defended the decision, adding: 'I was going to manufacture them in England but the cost was so much higher, so I decided to go down the route with Chinese factories instead.

Starting out: Family-oriented Kathryn founded My Christmas Pyjamas, which provides matching pyjamas for the whole family, from her parents' spare bedroom. She later branched out to My Everyday Pyjamas, catering for the rest of the year

Jet-setter: She has travelled around the world, with trips to St Lucia, Montego Bay and Australia evident on her profile

'I did find a factory which is ethical and I did a lot of research to make sure it is a good factory.'

Meanwhile the advisors also questioned her overly ambitious plans to grow the business.

Meanwhile Claude questioned what the reward was for Lord Sugar after noticing she had a £250,000 loss in the first year of her business.

However when speaking to Lord Sugar, Claude backed Kathryn and suggested he could act like 'a bit of a mentor' to the businesswoman.

Despite clear problems in her business plan, the candidate has set herself apart from episode one when she led her team to victory in the first cruise ship task and immediately impressed mentor Karren Brady.

Bring it on: Describing herself as ambitious, kind, and often 'savage', she says she's there to win, not to make friends

Standing out from the crowd: Kathryn set herself apart from episode one when she led her team to victory in the first cruise ship task and immediately impressed mentor Karren Brady

'You could see when Kathryn walked into the boardroom she was full of confidence,' Baroness Brady recalled. 'She had poise. She had something about her.

'Kathryn did really well. She excelled at managing everybody, having a clear vision. You could tell from the start that she was one to watch.'

But after her early success, Kathryn struggled and lost two of the next three tasks.

Week five gave her the chance to put things right. When developing a character for a new computer game, she based it on herself, winning praise from investors and Lord Sugar.

Next came a string of failures, namely in the Wales tourism task, in which she put herself forward as project manager but ultimately lost.

With three wins and seven losses under her belt, Kathryn certainly has plenty to prove going into next week's finale.

Describing herself as ambitious, kind, and often 'savage', she says she's there to win, not to make friends.

She said: 'My dreams in my head are absolutely huge and I believe I can achieve them.'

Harpreet Kaur, 30, from Yorkshire, is fighting it out for Lord Sugar's investment to grow her dessert parlour business into an empire across the country

Boss lady: On The Apprentice, Harpreet's assertiveness, decisiveness, and winning record has made her stood out from the rest of the candidates

'I'm definitely a leader, I was born to take control,' Harpreet, 30, says of herself. 'And I'm always right.'

On The Apprentice her assertiveness, decisiveness, and winning record has made her stood out from the rest of the candidates.

But this same leadership was not visible in childhood.

Harpreet grew up with her parents and siblings in Birmingham. Her family remember her as a 'quiet' child who didn't mind time alone.

Own venture: Together with her sister, Harpreet founded Barni's dessert parlour. It started in a shopping centre and is now a standalone restaurant in Huddersfield, pictured

'I was happy being in a corner by myself, I didn't feel the need to be a big character,' she said.

When Harpreet was 11 the family moved to Yorkshire where her family ran a convenience shop. Harpreet had her first taste of work when she helped her mother behind the counter.

By the age of 18, she took on a full-time position at a high street bank while attending university.

'Harpreet used to come home, have something to eat then she'd work until about midnight on her Open University course,' her mother Jasbir said. 'She's always got this passion, this drive to do her best.

During the interview stage last night, Lord Sugar's advisors questioned Harpreet over her relationship with her sister Gurvinder, who is currently co-owner of her business

Harpreet graduated with a first class degree and by 22 she was managing the bank branch.

'My parents were so proud to finally say "my daughter is a bank manager". It's pretty much the moment all Indian parents wait for,' she said.

Then one day, she decided to break away and start her own business.

She explained: 'I was working so hard for somebody else but I knew I had the talent and the skill to be able to do it by myself and make some of my own money.'

Together with her sister, Gurvinder, Harpreet founded Barni's dessert parlour. It started in a shopping centre and is now a standalone restaurant in Huddersfield.

Reserved: Harpreet grew up with her parents and siblings in Birmingham. Her family remember her as a 'quiet' child who didn't mind time alone

During the programme, she explained she hoped to grow her business with six new stores with the help of Lord Sugar's investment.

She said: 'We've got these two cafes now, I've perfected the model, it can be scaled up. It works.'

She also revealed she hoped to diversify into the savoury snack market, which the advisors warned her against.

Harpreet's go-getter attitude has shone through in The Apprentice. She has the joint best record in the process, including two wins as project manager.

Now she has her sights set on the future: 'I feel I've got my business to a fantastic level but I'm want to scale up, I want to level up. I want the pressure.

First job: When Harpreet was 11 the family moved to Yorkshire where her family ran a convenience shop. Harpreet helped her mother (pictured) behind the counter

'I'm really confident Lord Sugar will see the opportunity in me and my business.'

Baroness Brady added: 'Harpreet has been a solid candidate throughout this process but now, none of that matters, it's all down to the business plan.'

However during the interviews, Harpreet's relationship with her sister was questioned by Claude - who accused her of being a liar for saying she was the 'founder and CEO of the business.

He said: 'It's not straight. You're not the owner...You make light of it, but Lord Sugar could have a problem. He's seen you and he hasn't seen your sister. It sounds like one of you is superfluous.'

Go-getter: By the age of 18, she took on a full-time position at a high street bank while attending university. Harpreet graduated with a first class degree and by 22 she was managing the bank branch

While speaking to Lord Sugar later in the programme, Claude said: 'I was impressed with her, but who is leading the business?

'But maybe the sister is the grafter? We don't know. That would need to be examined.'

But later Harpreet said the relationship wouldn't be a problem, saying: 'If it's a problem, she is prepared to step down.

'I've already had that conversation with her on a personal level, it wouldn't affect the business going forward.'

'If you don't want to invest in the business with the current structure, I've already had the conversation with her. You can invest in it 50 per cent and do it with myself.' 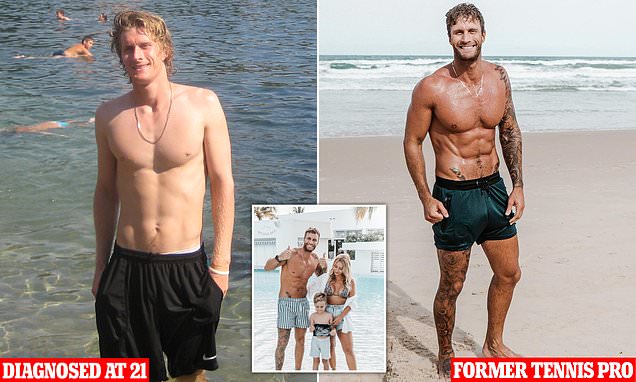 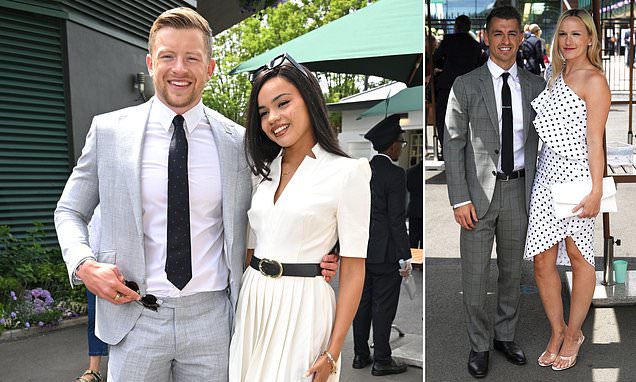 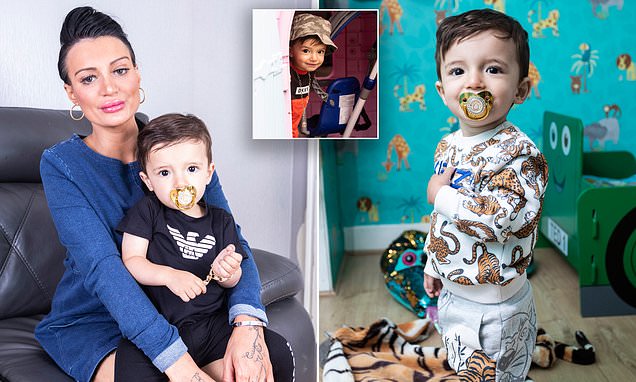